On to our next ingredients. We have some lovely shrimp, that still have their shells ON, but have been deveined (intestinal tract removed). Why are the shells still on? Flavor. Bones and shells have tons of flavor, which is why they are great for making stock. Also, the shells allow them to be better protected from over-cooking. *

Speaking of over-cooking, here is a trick I learned…
All of the shrimp started out in contact with the pan, but of course some cook a little faster than others. For those, just move them up on top of the other ones to finish. Now they are no longer directly on the hot surface, which will slow down their cooking. **


Side note, it’s very interesting how the shrimp start out an unappetizing grey and slowly develop to a beautiful shrimpy-pinky orange, when cooked throughout. Of course, I had to Google why. Answer: astaxanthin, a pigment compound in the carotene family that reacts to heat. Now we know.

After the shrimp move on to join the chicken and sausage in the done zone off to the side, some sliced crimini mushrooms (aka baby portabellas) get their time in the paella pan. Also good to note, additional oil can/will be added to the pan, as needed, as it is absorbed by the foodstuffs. ***

Meanwhile, over on prep, I have been tasked by Chef Husband to make an aioli. No recipe, just a bowl and a whisk and some ingredients, and my taste buds. To a generous scoop of already prepared mayo, I whisk in some fresh squeezed juice from a lemon, some granulated garlic, kosher salt and a few twists of black pepper, to taste. So the flavors can meld, the aioli will hold in the refrigerator, while the rest of the entree continues to be prepared. 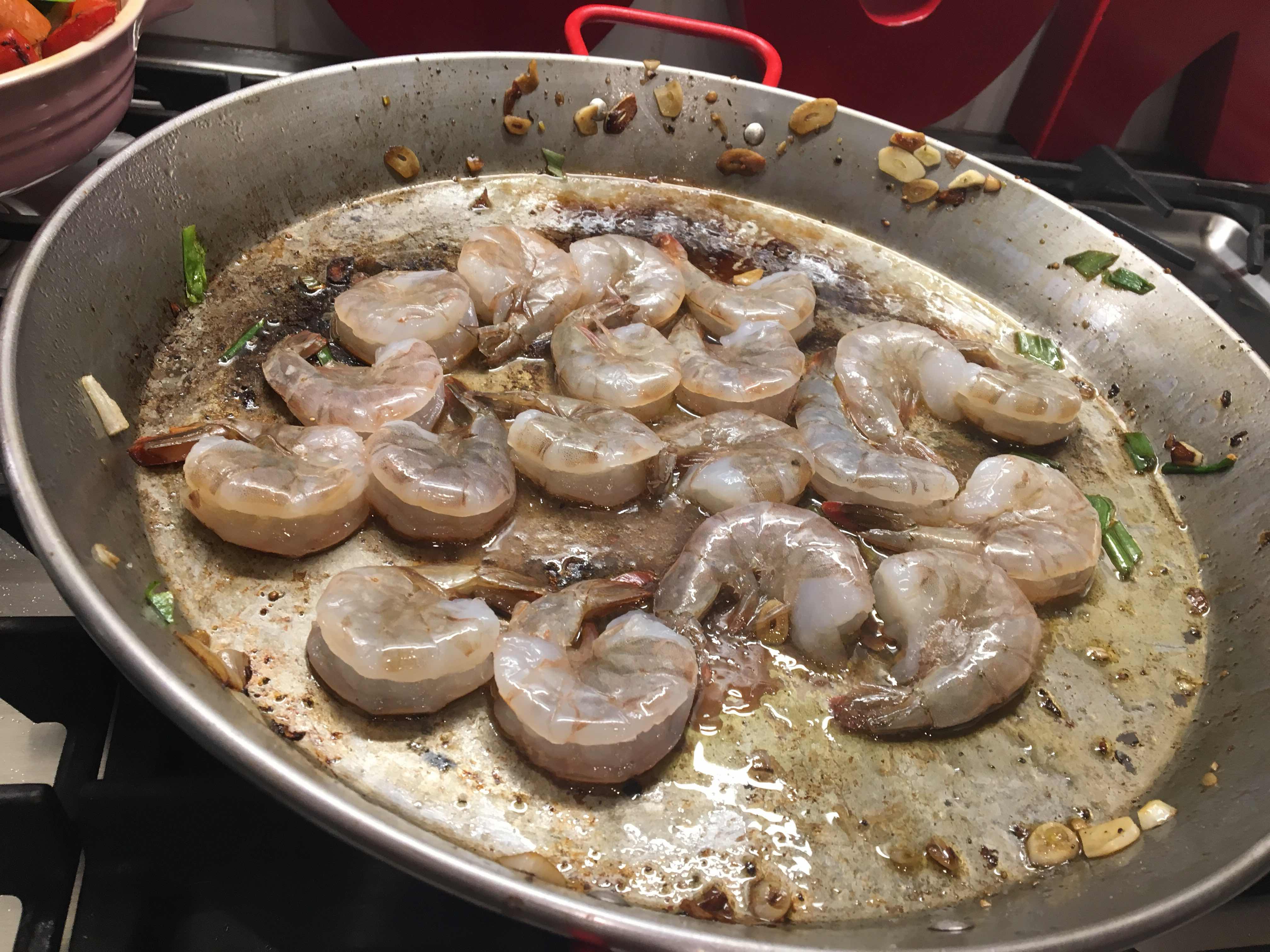 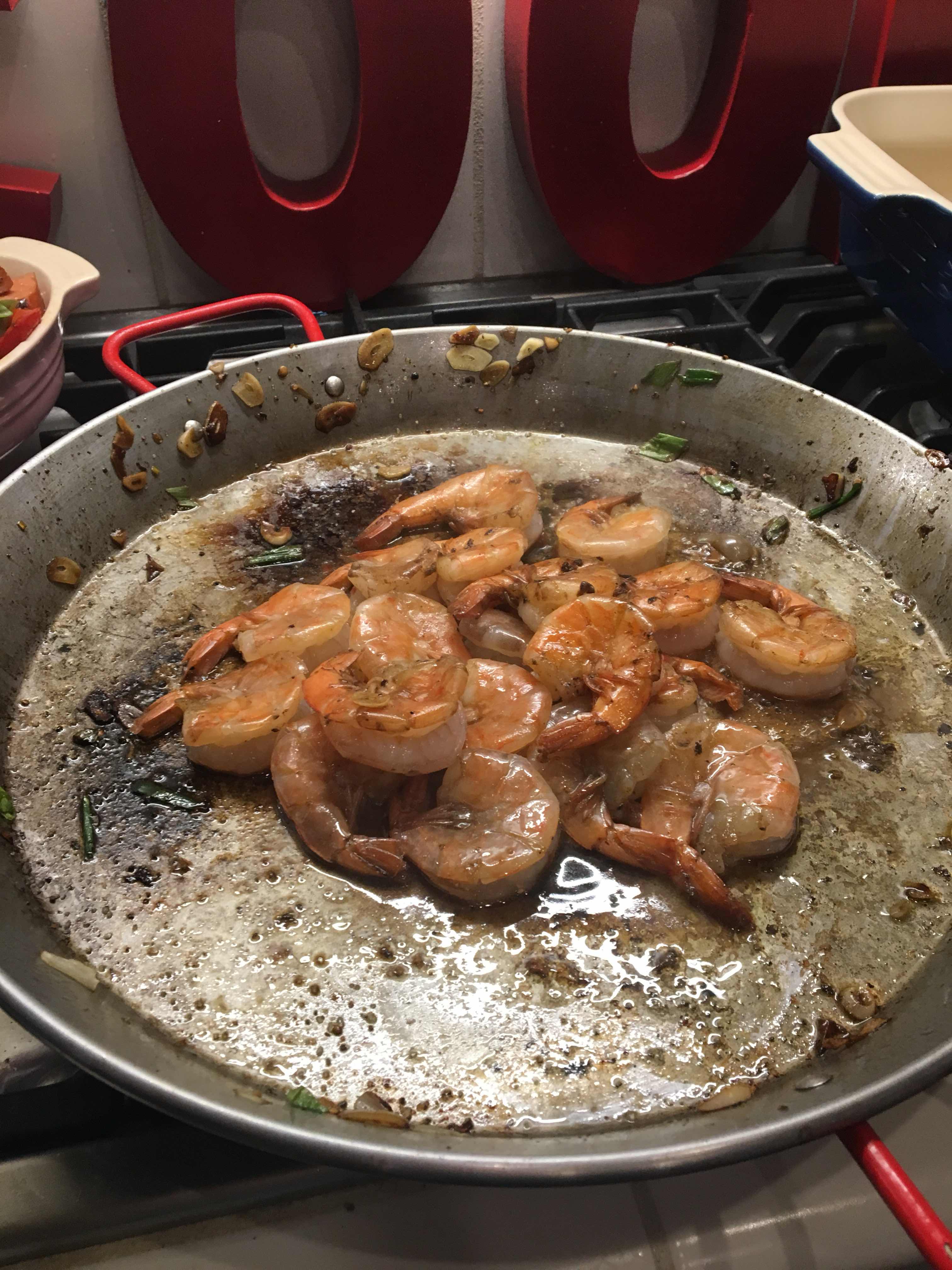 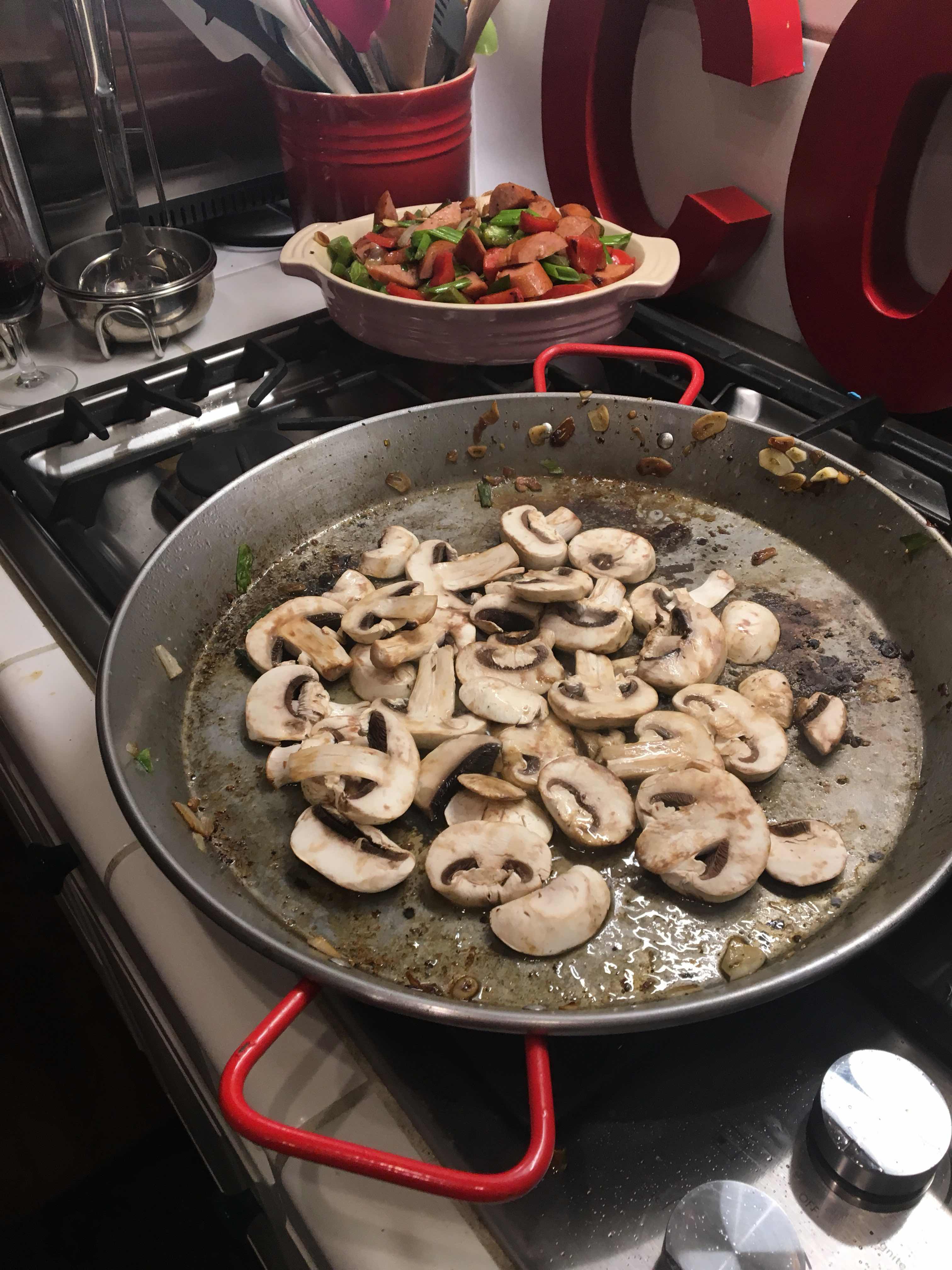 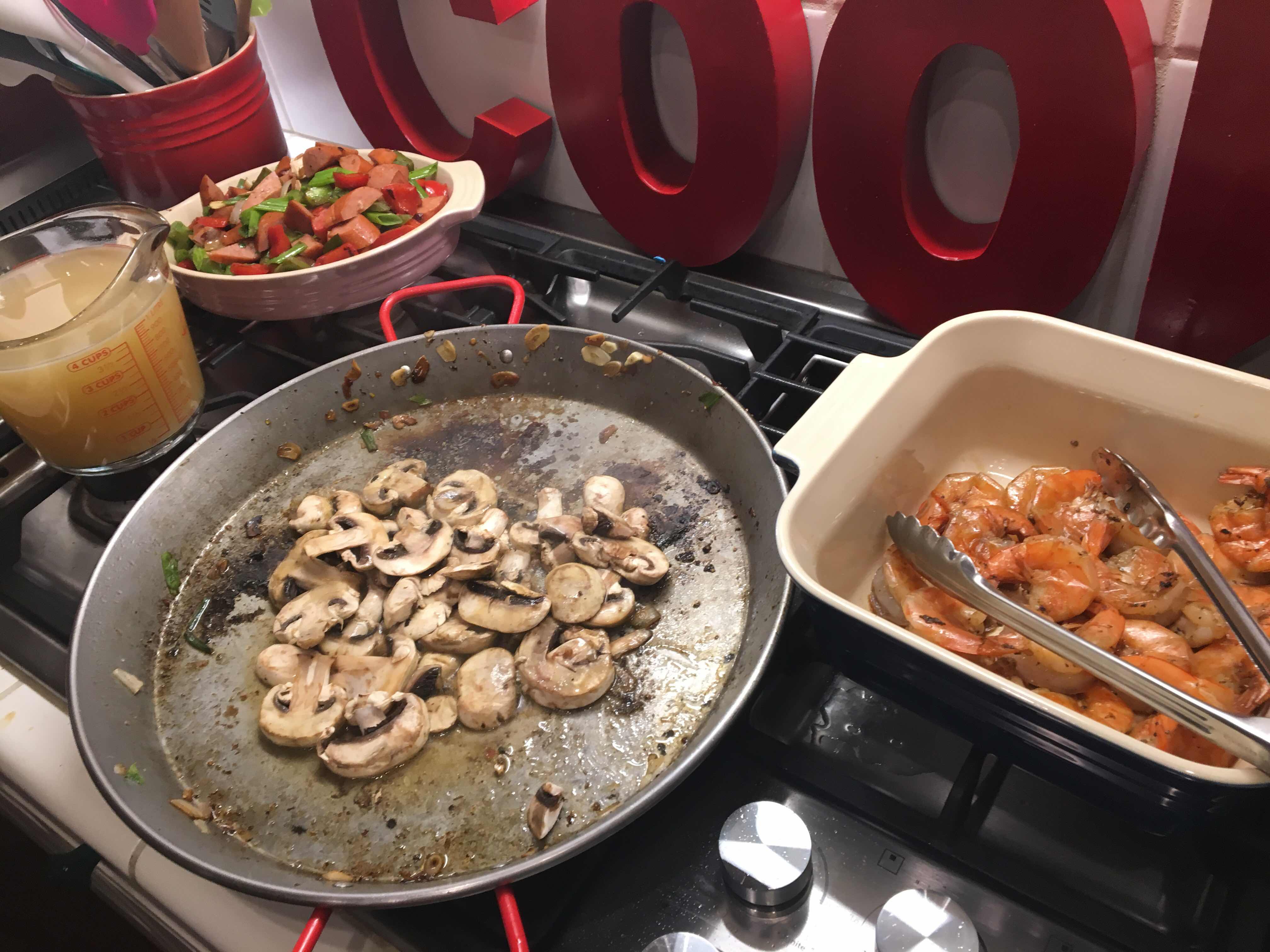 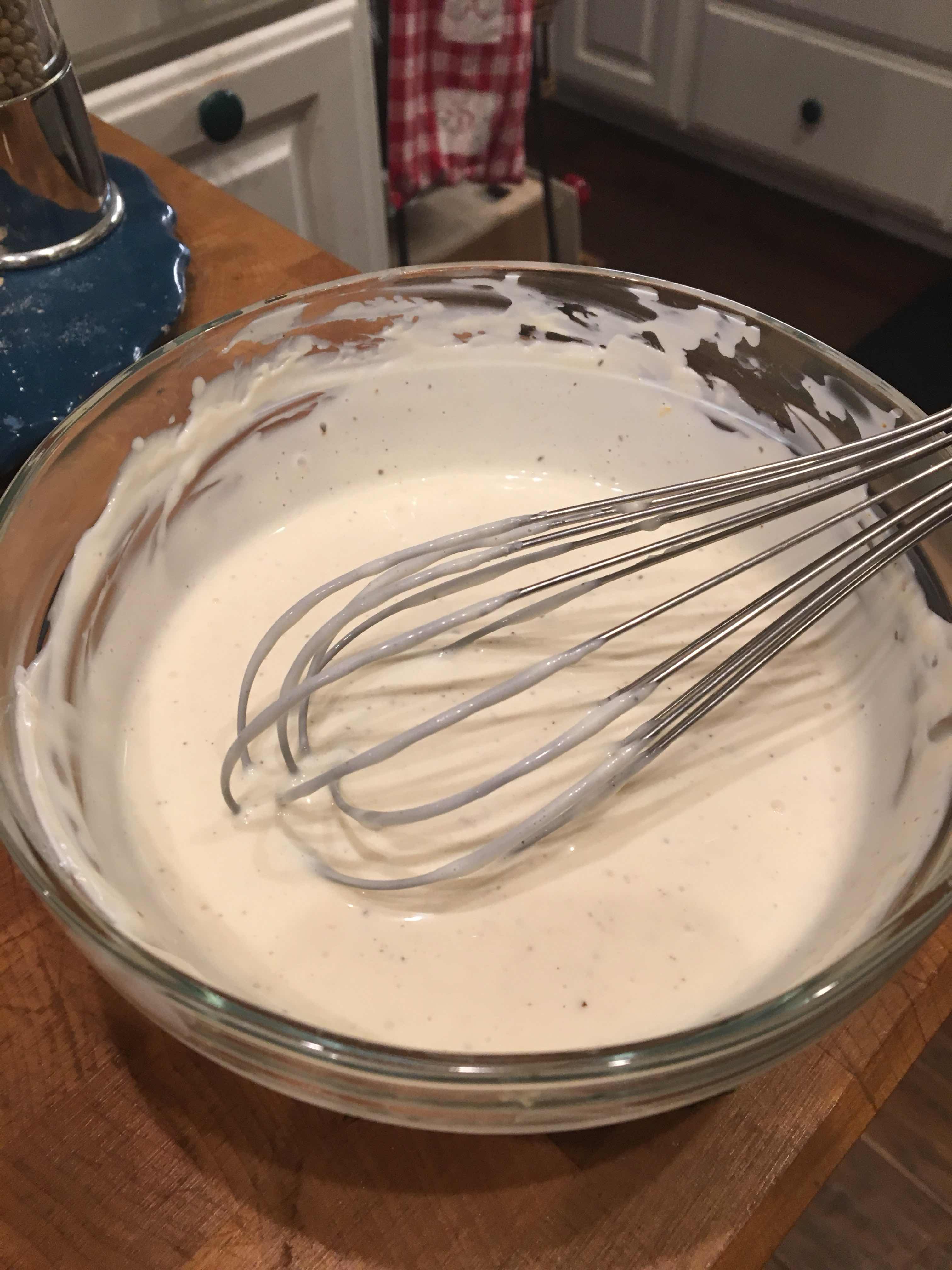 
** You must not allow shrimp to overcook, because they will become a texture similar to the bottom of your tennis shoe. Stacking them on top of each other in the pan, with the nearly cooked on top, slows down their cooking process, allowing all the proteins to be finished cooking at the same time. Remove them when just-cooked to a room-temperature plate.


*** Large portabella mushrooms should not be substituted. The more mature fungus will give your dish a brown color from its open “gills”.

Can you guess what’s going into the pan next? You’ll find out in Part 3 of our 4 part series.